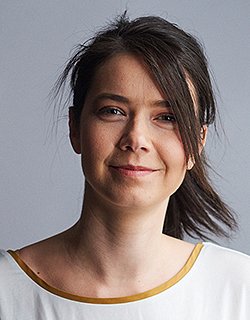 Director and writer of
CRAI NOU

Alina Grigore’s debut as an actress was HAPPY ENDING directed by Radu Potcoava. After 4 years of acting in TV series, she worked with Romanian directors such as Cristi Puiu and Adrian Sitaru. She is the author of 4 short films. Thus, she began work research on script developing and directing with director Adrian Sitaru and her students for the film ILLEGITIMATE. Inside InLight Center she directed the TV Series Pilot - The American dream, 2013 for the Romanian Television in Chicago, and the shorts DOMINO (2016), TRIPTIC (2016) and RIVER-BET (2017). Alina is a Berlinale Talents alumni for writer/director 2018. She directed her first feature film, BLUE MOON that had the world premiere in the Official Competition of San Sebastian Film Festival, 2021 and is currently working with Oscar winning, actress Melissa Leo, for her next feature film.