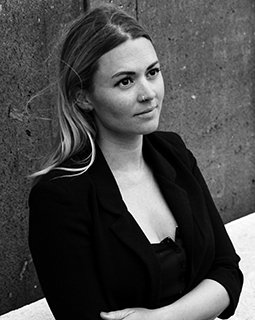 Producer of
THE TROUBLE WITH BEING BORN

Andi G Hess, native Viennese, worked as a producer, director and production manager on projects in Europe, the USA, South America and Africa.
A professional training in Los Angeles (2011) and a program for international co-production (Atelier Ludwigsburg-Paris, 2013/2014), were followed by THE IMPOSSIBLE PICTURE by Sandra Wollner, shot in 2015 entirely on 16mm material. It was her first feature film as a producer and received numerous awards and festival invitations, including the German Film Critics' Award.
Andi G Hess then worked in Feature Films Dep. Red Bull Media House for more than 3 years in Salzburg on cinema productions around the globe. During this time she was also an elected board member of the Atelier Network, an international filmmakers association with over 300 members.
In 2018 Andi G Hess relocated back to Vienna to rebrand & build a feature films and branded content department within an Austrian film production company.
At the same time, the feature film THE TROUBLE WITH BEING BORN, by Sandra Wollner, was produced. 2020 it won the “Special Jury Award” at the Berlinale section "Encounters" and the "Big Diagonale Award for the best Feature Film”, among others.
Andi G Hess has been a producer at DOR FILM Group since spring 2020.